The history of Oktoberfest and its costumes 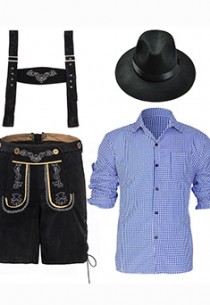 Oktoberfest a German beer festival which is simply a great time to have fun with friends and drink beer. Many companies, especially if they are German, will host Oktoberfest parties. As its name suggests it is celebrated in October, with it actually commencing in mid-September and lasting for two weeks, ending on the first Sunday in October.

For those who may not know the history behind the annual event, here is the story, with particular reference to why the different Oktoberfest costumes that are available on our site and what they are.

The first Oktoberfest was held in Munich in 1810 to celebrate the marriage of Prince Ludwig to Princess Theresa. There was a field named after her honour, which translates as Theresa’s meadows, in German is Theresienwiese, which the locals now call, Weisn. This is still the fairground in Munich where Oktoberfest is held every year.

While the main purpose of Oktoberfest is for brewers to showcase their beers to the public, it was always an opportunity for people to wear costumes and participate in parades to cement their local pride.

In Australia, Oktoberfest is celebrated at various venues and for those wanting to fully participate in the festivities by wearing a particular German Oktoberfest outfit, you can choose from many for both men and women. Most people will be familiar with the Lederhosen costume, which are traditional leather shorts held up with braces made of leather.

They are often ornately embroidered and each type of embroidery will have an origin with a particular region of Bavaria. The Dirndl costume is the name for what in Australia we would call a German “beer maid costume’, but it has a long history. For women that are not under size 16, we also provide a range of plus size Oktoberfest costumes.

Now is the perfect time to start planning your Oktoberfest costume for this year’s event. It is a great feeling to look the part when you are mixing with others who are in the spirit.