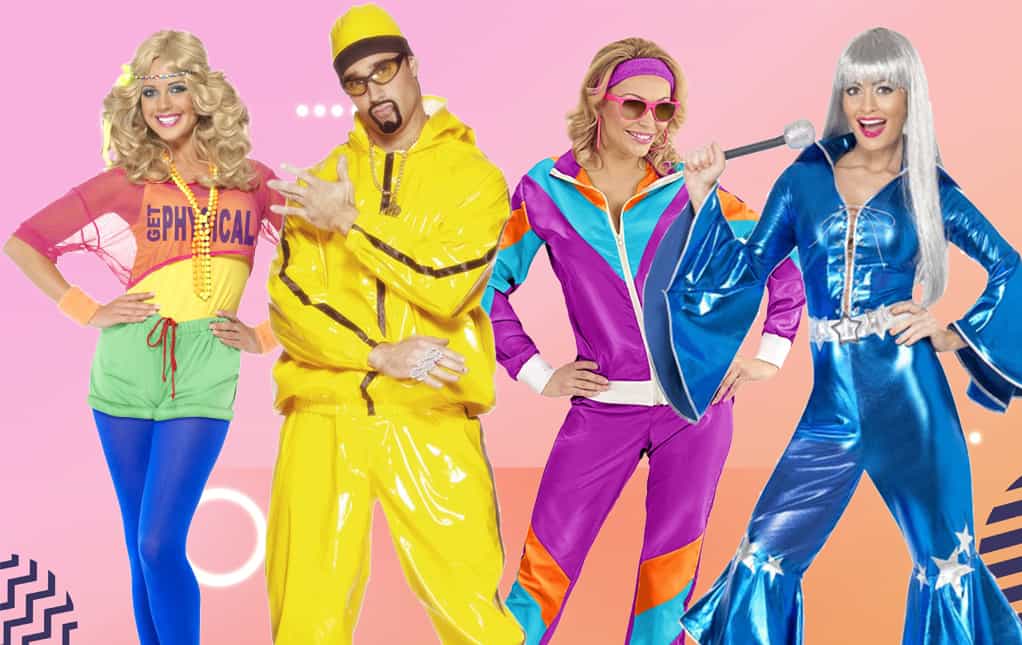 80s costumes make a great idea for a dress up party. We have everything that you need from mesh Tops and gloves to rocker outfits. The defining element of 80s outfits is wild colour. Whether you want to wear a rockstar costume, Valley Girl or aerobics costumes, we have them all.

There are so many 80s costume ideas due to great music, TV and movies from that decade. We have outfits for women, men, couples and kids including so many accessories, gloves, leg warmers, earrings, wigs. Think of movies like Back to the Future, Valley Girl and the Breakfast Club. 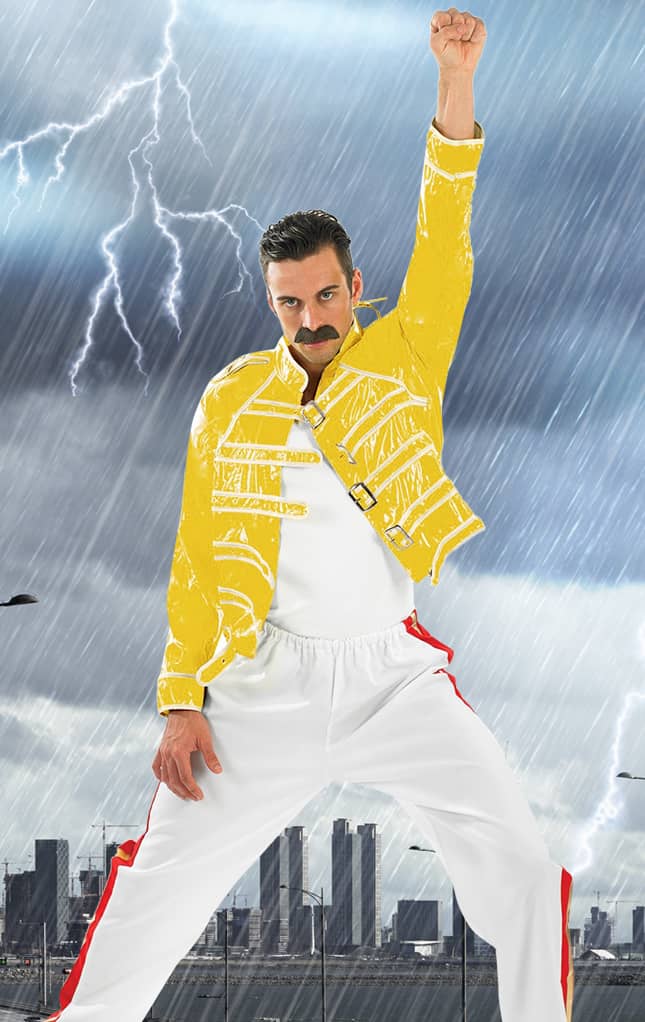 The most popular look for mens 80s costumes is the rock star or rocker. With costumes copied from Freddie Mercury’s costume, as well as Prince you will look the part. However, if you just wanted to choose pieces from our collection to make your own costume, you have a lot of options to choose from. Make sure to get a spiky wig or a mullet to complete your outfit. 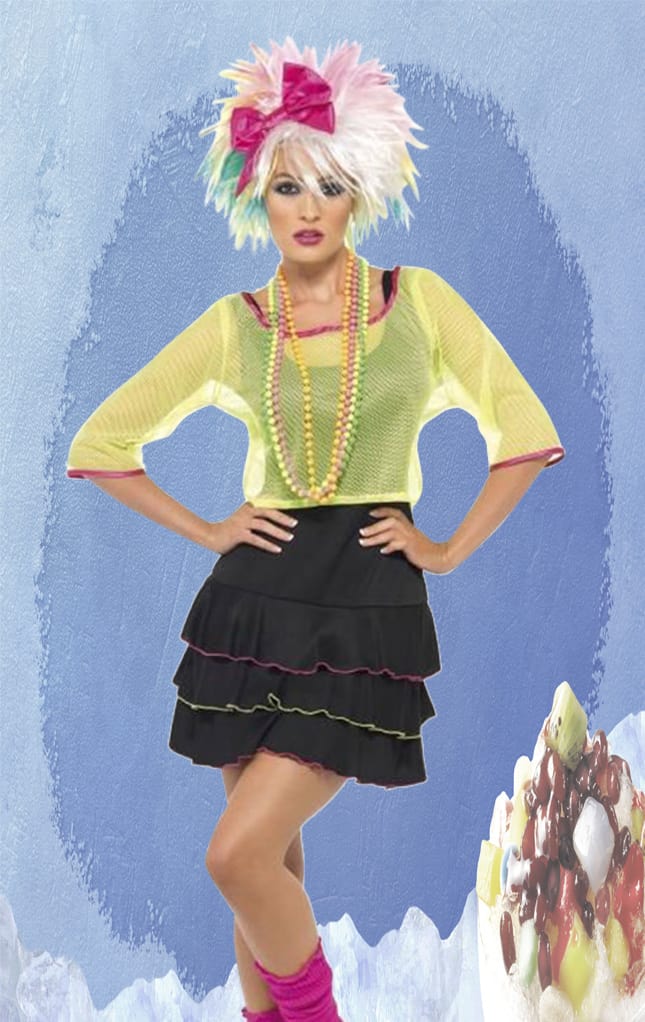 When you think the 80s you think, big hair, loud colours and mesh. In the 80s, music influenced style. One of the most influential 80s icons for women and girls was Madonna. You can find what you need for a great Madonna costume. You will find beads, layered fluro skirts, corsets fingerless fluro gloves and big spiky wigs as well. We also have a good supply of women plus size 80s costumes. Some of the important 80s dress up themes for women are the rocker chick and the work out costumes. 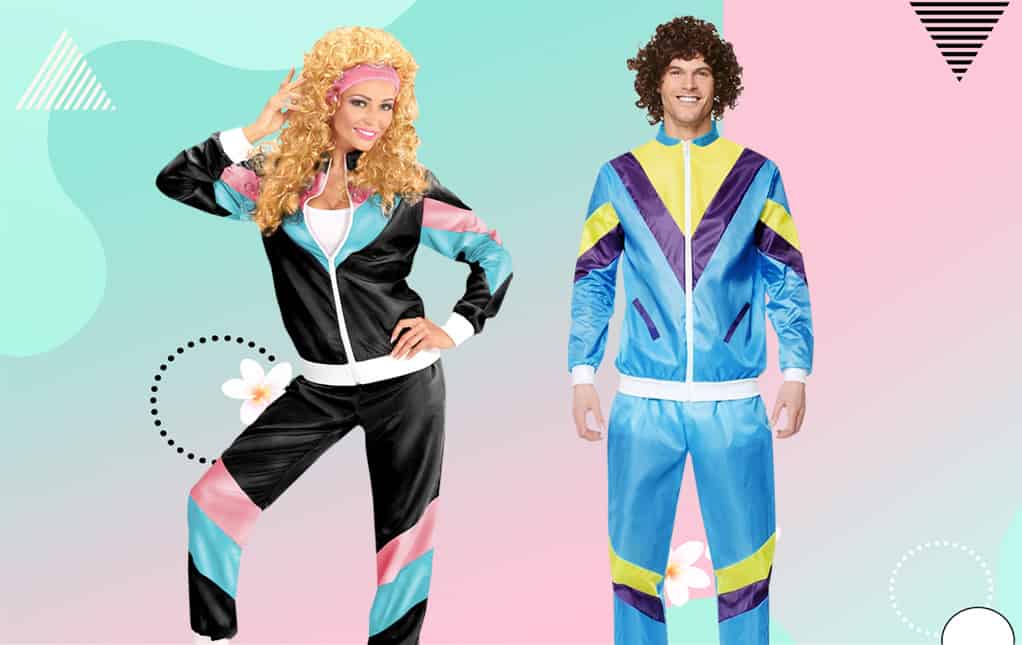 Make a great statement as a rock star and groupie. We have a good range of outfits for couples to wear to an 80s dress-up party. Tight jeans and black band t-shirts with a denim vest with studded belts are good starting places for a rock star costume. Layered styles with mesh shirts add authenticity to the look. For a sexy groupie, you can wear lycra leggings, animal print tops, lots of big hair and colourful makeup. If you would prefer a more sophisticated look, you could choose Top Gun costumes.

If you want to dress up for Halloween or any fancy dress party a great 80s dress up idea is around a prom theme. We have many sexy Valley Girl Dress ideas to throwback to the 80s. It works well for men too as they can wear their blazers or cut off denim vests and skinny ties. 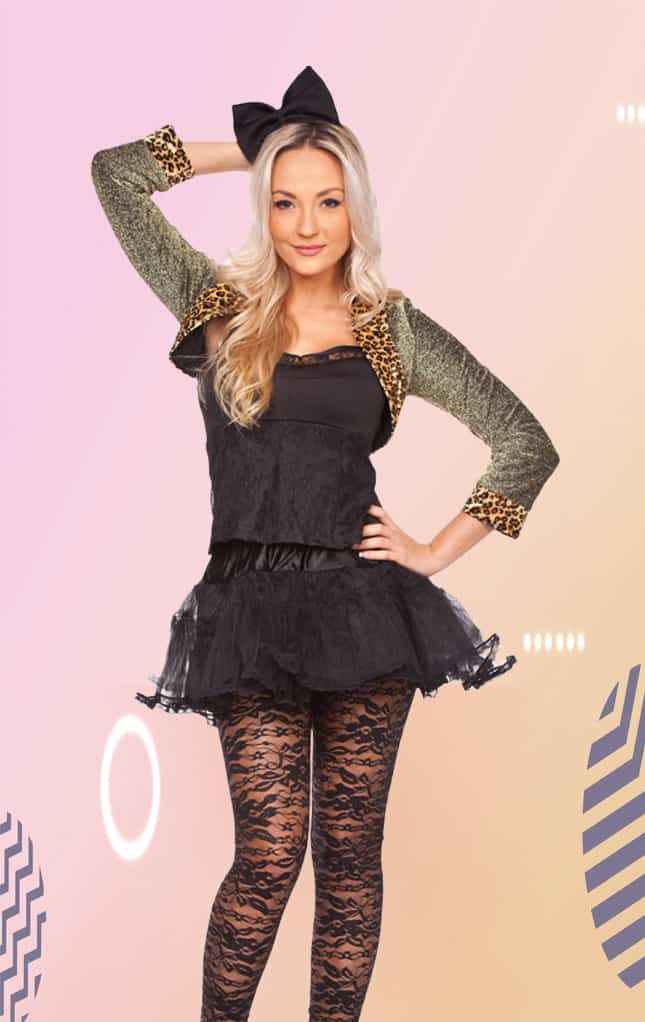 With great music in the 1980s like Kiss, Van Halen, Prince, Madonna and Queen we have the 80s rock costume look to get you revved up. The classic 80s rocker or 80s rock chick with denim patched jackets, jeans or mini skirts, lace stockings and big hair. Check out our Cyndi Lauper costume for an 80s fancy dress event. If you really want to make a statement get the Freddie Mercury costume and add a moustache. 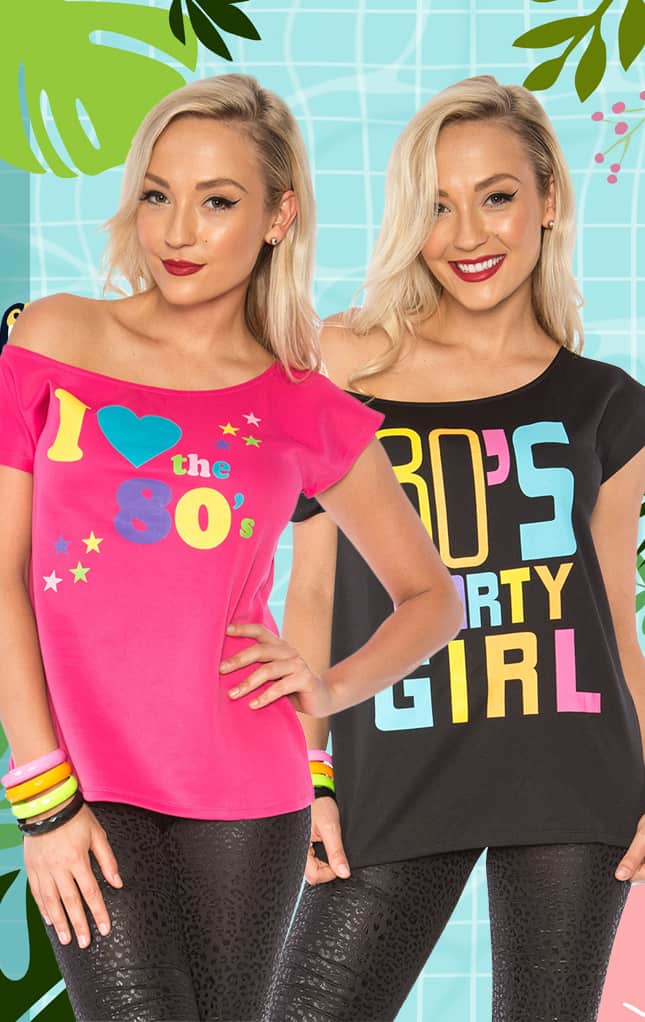 You can find some happy 80s disco costumes for men and women. Although by the middle of the 80s disco was not as popular as in the 1970s, it was still something that was portrayed in movies like Dirty Dancing, Flashdance, Footloose and Staying Alive. You can find something for both men and women for your disco dancing dress ups on our site, especially with the leg warmers, and lycra leggings in bright vibrant colours. 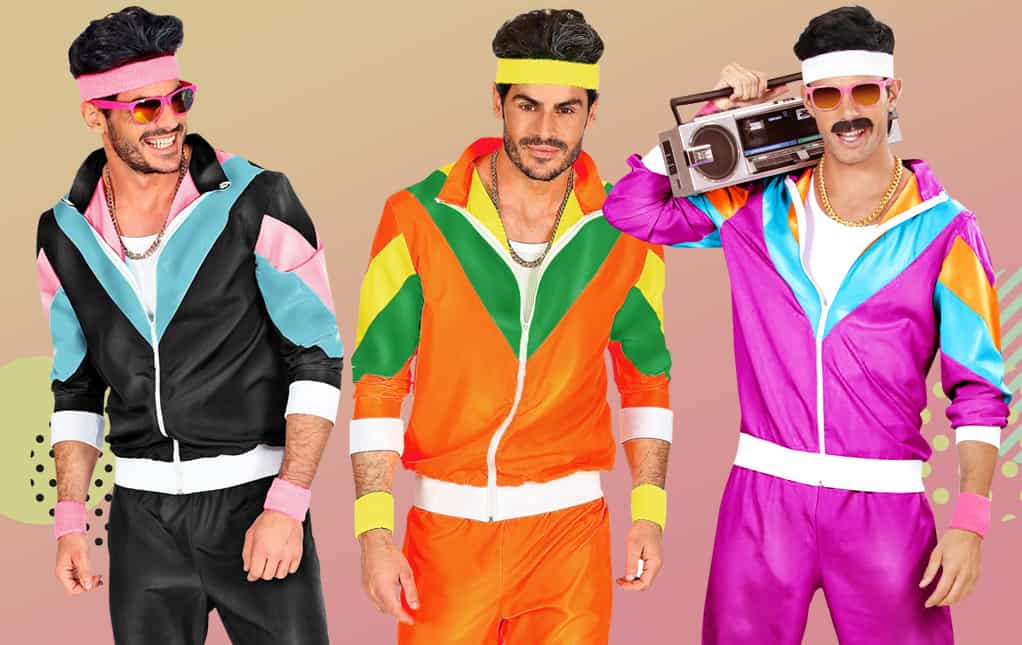 The very colourful 1980s were in mens outfits at this time too. You will see that we have some very colourful 80s tracksuits for men. The 80s was a time for getting to the gym and doing aerobics so we have a lot of lycra leggings that men can use to wear to an 80s dress-up party.

When you host an 80s theme party you will have the best time. The 80s was all about fun and decadence. Big hair, loud music, sexy and cheeky clothing, dancing and lots of colours defined the decade. 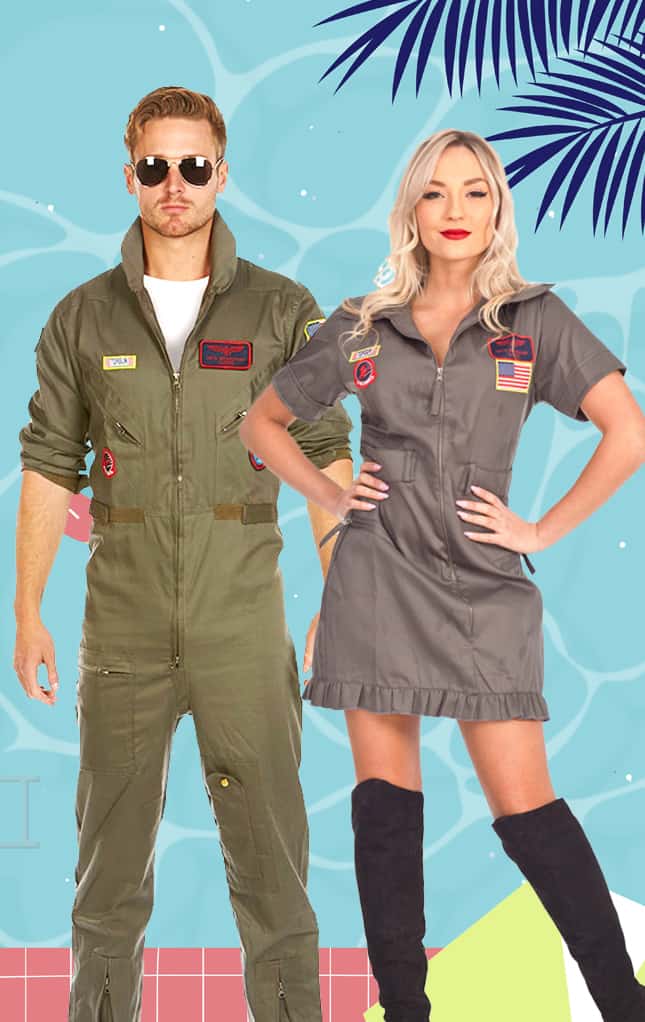 There are hundreds of ideas for Halloween when it comes to 80s costumes. Even in different categories on our site, you can find 80s fancy dress ideas for movies such as ET, Star Wars, Ghostbusters, Ali G Rapper, Back to the Future, Rambo and many others. We have so many dance-oriented dress-ups for movies such as Dirty Dancing Costume, Prince musician costume from the movie Purple Rain. Movies like The Breakfast Club and Sixteen Candles are also great ideas for group costumes as they feature proms. 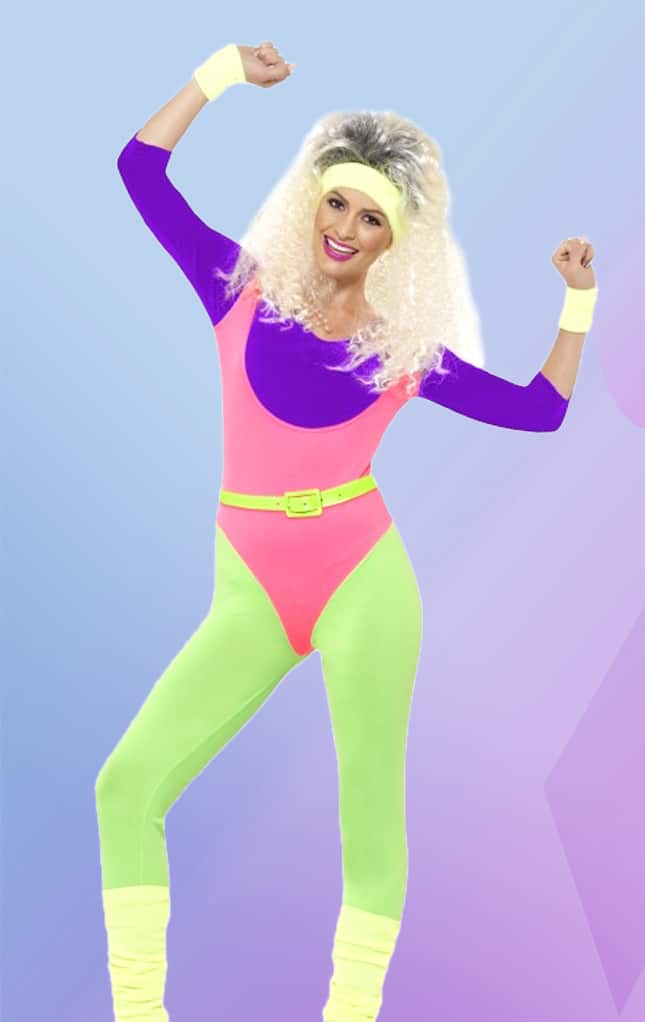 The 80s started the aerobics craze and we have so many gym and workout styles to choose from. You must get leg warmers. If you’re not sure, you can look at movies like Flashdance or Fame to get ideas of how to put these 80s costumes together.

Your 80s fashion journey starts on our pages where you can browse for hours for the perfect 80s dress up ideas. Colourful lycra, layered mini skirts and fluro mesh t-shirts teamed with long beads and fingerless mesh gloves make a bold statement. The great thing about the 80s was that men would wear these bright colours and even makeup. Fishnet stockings, sometimes torn, look great under colourful mini skirts and loose t-shirts with a thick belt. Also thinking about Madonna costume style where underwear was worn on the outside.

For kids 80s costumes you have a big choice of movie themes. Our ET costumes are popular as well as Ghostbusters, Madonna Costume and Star Wars. 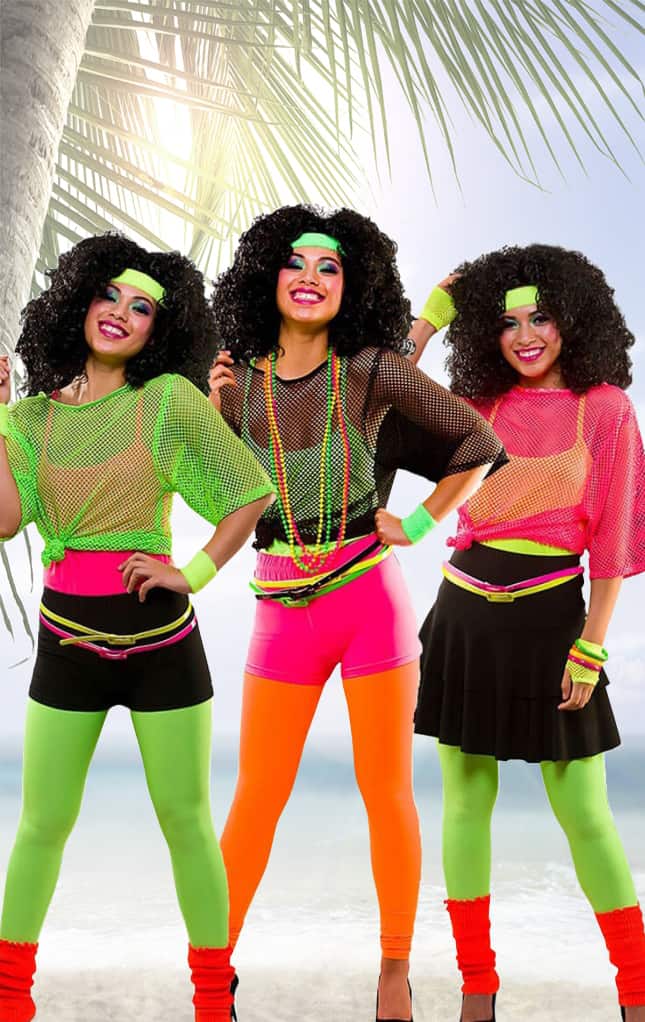 If you want to dress like a rock star, you can choose animal print tops, lycra pants and lots of belts and mesh shirts. For women, torn mesh t-shirts and layers of off the shoulder torn band shirts is another authentic 80s rocker chick look. Wear Doc Martens boots or 80s Go Go Boots. Get yourself the biggest hair and really colourful makeup and you will look like you walked out of MTV.

We have an amazing range of 80s accessories such as leg warmers, beads, earrings, rocker wigs, as well as moustaches, fingerless gloves and 80s party lace headbands.