What do you Wear to an Oktoberfest Party?

This entry was posted on September 30, 2021 by Costumes Australia. 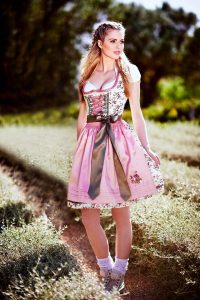 Oktoberfest costumes come from the popular German beer festival that is celebrated from late September to early October. The traditional Oktoberfest outfits for men are called Lederhosen and for Oktoberfest costumes for women are called Dirndl. Nowadays there are so many varieties of this traditional German costume to choose from, in a range of flattering colours and textures. You can find Oktoberfest costumes for couples in Australia, leading up to this time of the year. This festival coincides with annual celebrations in Australia such as the Australian Rules Grand Final and the Rugby Grand Final, so we had our own traditions of beer drinking at the same time. Oktoberfest gives us an opportunity to dress up in exotic costumes. 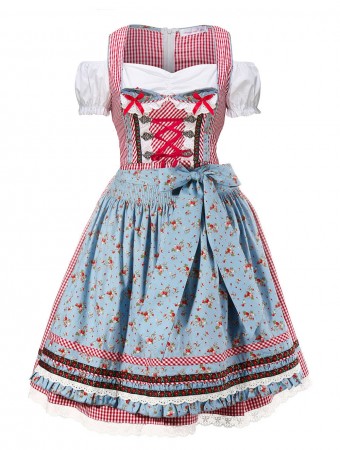 If you're not sure what a typical traditional German costume for Oktoberfest for women may look like, think about the outfit that you associate with Snow White. A classic fitted bodice, with or without laces like a corset, over the top of a fuller knee-length skirt is the basic Oktoberfest women's outfit in Australia, Germany or where ever Oktoberfest is being celebrated. This costume is referred to as a 'dirndl'. In Australia, it is more colloquially known as a German beer maid or beer wench outfit, and the skirts are normally much shorter than knee-length. Over the top of the skirt, there is normally an apron. The Dirndl is often worn over a short sleeve blouse that can be worn off the shoulder.

Because Oktoberfest is a beer festival, it is one more suitable to be celebrated by adults than children and this is one of the reasons that the women's beer wench costumes tend to be a bit risque and sexy than would have been traditional in Germany. With the Dirndl there are a huge variety of different styles, some more modest, some sexier in all sorts of colours. You can choose to coordinate with your girlfriends, or if you wanted to go as a couple, there are a range of gender-bending friendly alternatives, with Lederhosen designed to be worn by women, not just men. 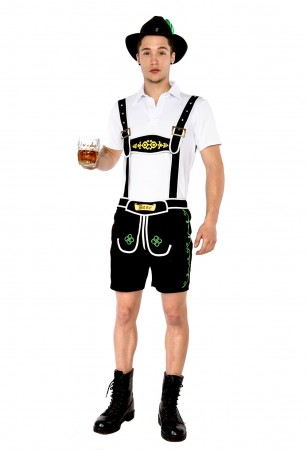 Lederhosen involves long shorts held up by suspenders and a brace across the chest, paired with a matching embroidered or check shirt. To complete the Oktoberfest look, this lederhosen outfit is worn by men with a feathered hat and long socks. Lederhosen costumes are in our imagination for children's German folk tales. Just like we discussed that Snow White helps us to imagine Dirndl when we think of Hansel and Gretel we can imagine the children's father wearing lederhosen as he abandons them in the woods. Although traditionally, lederhosen were made from leather, nowadays they are made from much more easy to maintain fabrics such as polyester or cotton. These costumes originated from the part of Germany that is known as Bavaria, where the initial Oktoberfest started in 1812. 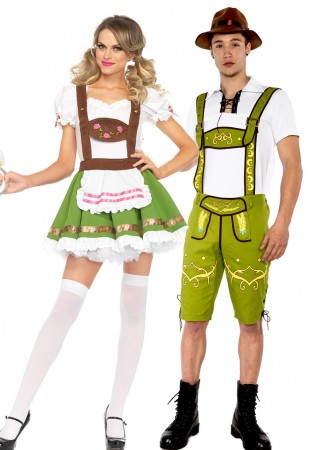 Consider the Oktoberfest event that you are dressing up for. For example, you may be wanting to actually go to a local beer festival or party. If that is the case, make sure that the costume you'd like can be easily laundered as you may get beer spilled on you in the fun. If that is not a concern, you can choose more elaborate styles for the appearance, not just the function.