What Are Oktoberfest Costumes called?

This entry was posted on October 7, 2021 by Costumes Australia. 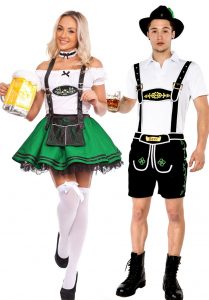 Oktoberfest costumes for men and women have German names because the festival celebrates a German (or more precisely a Bavarian) tradition. As its name suggests, it is celebrated around October, from the last week of September to the first week of October. The Oktoberfest celebration has spread from Germany to all around the world. In Australia, it occurs at a time that there are many public celebrations such as football grand-finals, and the start of the Spring horse racing carnival. It is celebrated by gathering together in traditional German outfits, drinking beer and dancing to music.

Lederhosen Costumes for men or women 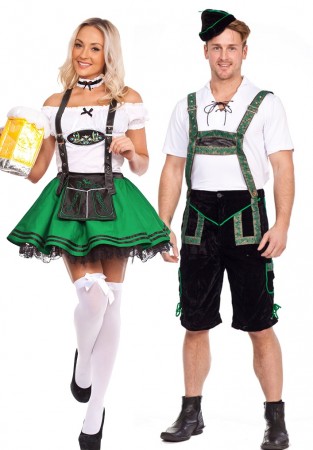 The traditional German Oktoberfest costume for men is called Lederhosen. Simply translated it means "Leather Breeches/Shorts" because traditionally these were made from leather. They are no longer made from leather and they usually fall to the knee. Because the climate in Bavaria (a region of Germany near the Alps), is very cold, the leather pants, worn with long socks or stockings kept men cool when they were doing hard physical labour and did not pick up moisture from the snow through the bottom as they would do with long pants.

The Lederhosen is held up by 'H'- shape braces across the chest and over the shoulders, and these braces are usually ornately decorated with embroidery. The lederhosen is worn over a button-up shirt, sometimes plain or sometimes in check prints. The full Oktoberfest dress up with Lederhosen for men will normally include a slanted hat, complete with a feather. Sometimes a formal vest and fitted blazer will be worn to traditional events like Oktoberfest. Although traditionally lederhosen is a man's costume, in recent times due to interest and demand, there are modified designs of women's lederhosen costumes. 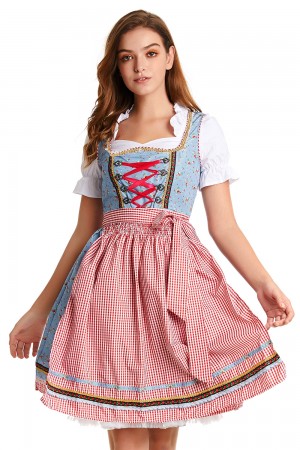 As Oktoberfest is a beer festival, you may be more familiar with the description of German Beer Maid Costume instead of the traditional term, Dirndl. In all Dirndl styles, there are four component parts: a fitted bodice with a low neckline (with or without ribbon lacing, but commonly it is laced similar to a corset at the front), a skirt, a blouse and an apron. The apron comes in very handy for wiping hands when carrying beer that spills. The blouse can make the deep neckline more modest for those who choose this, or can also accentuate the bust for those who want a more sexy Oktoberfest outfit, such as a German Beer Wench costume that typically has a shorter shirt and lower neckline.

This German traditional outfit for women has an amazing amount of different styles and is made of different fabrics, including cotton, polyester and even velour, especially for the bodice. Accordingly, the price of the dirndl varies according to the level of detail in the embroidery as well as the material it is made from.

If you are not sure how to search for Oktoberfest costumes, try: